The ABC of Me (Foodie)

Today is a mini-break of the A-Z Blogging Challenge April 2011, as will be the next three Sundays of the coming weeks.  This is done because removing the Sundays from blogging days this month will give the participants exactly 26 days corresponding to the number of letters in the alphabet.

On the way to church this morning with middle daughter, riding our bikes to go to her communion class, I had an idea  of using Sundays of April as a mini-series with the title: "The ABC of Me" to remain in the zone and keep the momentum of  this month's blogging theme.  I love making decisions on the bike. ☺

I thought it will be good opportunity to make up for the blogs I never posted but promised to do- introducing myself (i.e. sharing random tidbits about me)! Yes, a quarter of the year passed since this blog was created, and I have not gotten around to it!

I guess because the readers I initially invited to visit this blog were mostly family, friends,  with whom I lost touch, fellow bloggers from my time in anonymous blogging.  How they read the blogs is exactly like how I started this blog, diving into the current flow of my life.

So here goes, a long delayed introduction to yours truly in the series, "The ABC of Me"!  This probably will go beyond the month of April because I feel it will be a fun thing to do in the future.  Also, it will not put so much pressure on me today! 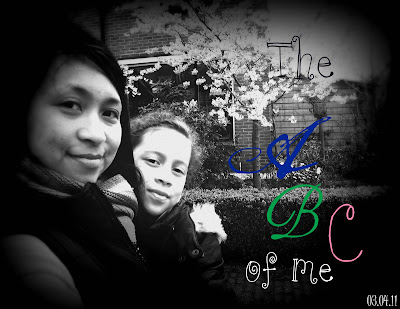 Since a good long standing friend of mine, whom I met in the blogging world launched her blog today: Phoebe The Foodie, I thought I will start off by doing The ABCs  of Me on everything related to food, as a tribute to a passionate spirit following her dreams one step at a time! All the best to you dear, Soulsistah!

I have not planned ahead of this because as I have mentioned this idea occured to me just this morning; this will be like most of my blogs very spontaneous!  Also, please feel free to make suggestion of random things/subjects you would like to know from me,  for the other three remaining Sundays!


Atsara/achara is the Filipino, and Spanish word respectively for pickles.
But for me, whenever this word comes to mind, it conjures the memory of my paternal grandmother, who used to make homemade shredded pickled papaya, that she distributed to the entire clan.  I think, as a child I ate it together with everything fried, that my mother served us for lunch.  Recalling the flavour makes my mouth water.


Banana
Another childhood memory - I grew up eating banana to every dish I ate while I was a little girl.  Until now, it gives me great pleasure to eat a savoury dish with this fruit, au naturel or fried, as P likes it!  This is one quirk we both share and I can't tell him enough how I love him even more for it!
Cheese
I love all kinds of cheese! Hmmm, I can probably (well, tomorrow the air may carry some other awesome ideas, too!) use this as my word for tomorrow's letter C! ☺
Donuts

My first donut, or that I could recollect is  from Mister Donut, which my Dad brought home after his work (more on this in the letter T!) .  Later on, when I was a working student, and could afford to eat out my loyalty changed to Dunkin Donuts.
For a looong period of time, during life in Germany, where there is literally a bakery every 10-20 meters in the neighbourhood, I had to wait for New Year's Eve to get a donut treat since there was no Mister nor Dunkin Donut at all!  And the donut did not have a hole at all!!!
They were also not called donuts but Berliner, and as you can read on wikipedia (if you click on the Donut link above) only in other parts of German but not in Berlin,  where it is called Pfannkucken.

I feel I eat a lot of them! Sunny side up, scrambled, boiled,poached.
Not to mention use them for many of the meals and dishes etc, I prepare: sandwiches, salad, soup, stew and the family's all time favourite:pancakes!

My history with learning to cook in Germany, and my food travels through the country is a collection of long stories to tell, so a shorter version for now.  My mom was in her words, spoiled by my grandmother, that she never had to learn how to cook until she married my father.  She learned a whole lot from my paternal grandmother, who she could look over the shoulder.
This tradition, I continued with my German mother-in-law.  She lives in the South of Germany, and when stayed over for long Summer vacation at the early years of my marriage, I would observe as she cooked traditional German dishes.  I was lucky to have met both grandmothers of my German husband, and heard stories of how life in the kitchen was in their time, interpersed with stories about the two wars that both their husband had to fight.
As I learned German, the different cities, I also got to know the culture not only through history, art but most of all through food!

Wonderful childhood memories resurface with the mere mention of this famous Filipino dessert! Again, the stories and memories behind what once was for us a Summer long treat will have to be elaborated some other time.  It will be worth it!
Indian cuisine

It is my dream to one day have a kitchen that stores extensive array of spices and herbs, that I can prepare Indian dishes, not only for my family (who shares my love for the spicy food!) but also for spontaneous guests.
Japan

There are many cities and countries, I dreamed of residing in for a year.  Yes, exactly 12 months.  Japan being one of them.  I would like to experience the different seasons in the land of the rising sun, particularly Spring!
To see and experience what I have only seen in documentaries, for example how a Fugu is prepared by a highly qualified Japanese chef.
Kroket (Dutch Croquette)

I fell in love with the kroket when P showed me the village of his birth.
Luau

I dream of celebrating a birthday or a wedding anniversary with a luau, inviting my family and friends, with all expenses paid.  Where else but where it originates: Hawaii!!!
Mince pie

One of my most beautiful memories in life was eating mince pie during tea-time in London...another one of those long stories for the future. *melancholic sigh*
Nuts

I ♡ them in my salad.
Olive trees

Hopefully in the future I could photograph a plantage of olive trees.
Pop-corn

I like salty ones when watching in the movie theater but carameled flavoured ones when we are viewing home movies!
Quesadilla

I miss eating them in my mom's sinigang.
Sausage

The family and I can't seem to resist to eat the sausages in IKEA everytime we go there.  We could even say, we only use the excuse of wanting to get something when in fact at the end of the day we never get what we came for but always have time to eat their sausages!
Take-aways

When I was growing up, my Dad † usually brought home some take-aways after he ended his work.  It was something that he and my mom started between them during their years of courtship, and continued on throughout their marriage.  A romantic practice that made us stay up late during weekends in the anticipation  something delicious!  This was before the time of mobile phones, and we did not have any telephone at that time.
Ah, memories of donuts from Mister Donut, pizza from Shakeys, or siopao, luglug etc from Chinatown, or chicken from Max's, just to name a few.
Ulam (Filipino word for viand)
I miss hearing the query in Filipino, "Anong ulam ninyo?" (literally, What is your dish?), / "What's cooking today?"
There is a certain quaint feeling to how Filipino neighbours asked this amongst themselves.
Vanilla-ice cream
I enjoy apple cake most when I eat it with vanilla-ice cream!
Weather
The different kind of weather motivates me to think of different dishes to prepare for my family and myself.  Another topic that can be explored some other time!
Xacuti
Tonight is the first time I heard of this type of Indian curry! (at this point of what I thought would be an easy blog, I am scrambling and googling my pants off! 11:23 pm, time stamp!)
Yoghurt
I have not been eating some lately
Zen of Real Food: Keeping Eating Simple
The article above I would love to read tomorrow, while having second breakfast wtih P!
Goodnight folks in blogland! Hopefully, you enjoyed getting to know the "foodie" side of me.  It was very last minute idea, thanks to the launch of Phoebe The Foodie blog.  It would be lovely if you would check her blog, soonest!  She is going to be posting soon.

Btw if you ever do or have done, an ABC of Me (Foodie) post, please send me a link! I would love to read it, too.☺

Email ThisBlogThis!Share to TwitterShare to FacebookShare to Pinterest
Tags: 365, A to Z April Challenge 2011, Foodie, self-portraits, The ABC of Me